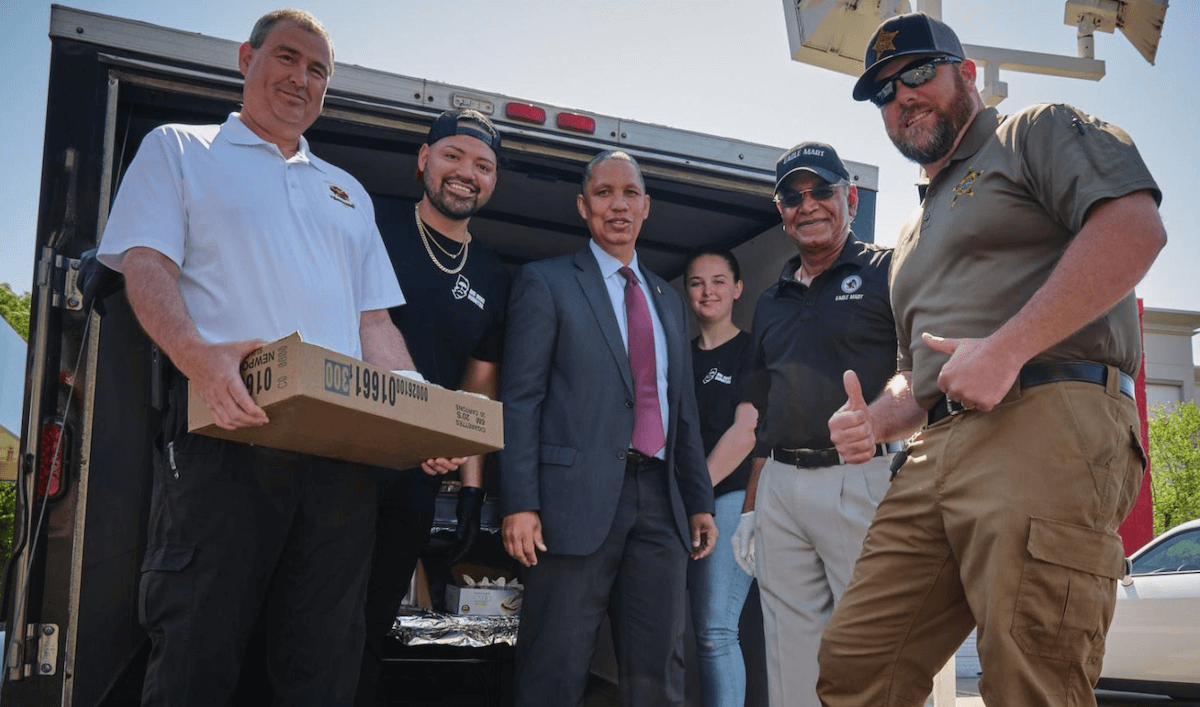 Pasquotank Sheriff Tommy Wooten says it’s especially important during the COVID-19 pandemic that his deputies and other first responders know the community supports them.

That’s why he’s thankful for community members like H.J. Patel, who provided more than 400 lunches for Wooten’s department, as well as members of the Elizabeth City police and fire departments, Tuesday.

“It boosts morale,” said Wooten, of the lunches, which were provided by Big Boss Burritos.

Wooten explained that like other businesses, the sheriff’s office had to make sudden changes to its employees’ schedules in response to the pandemic. Those changes, along with other aspects of the job, may be stressful, but gestures like Patel’s are appreciated by Wooten and his staff.

“There has been great support for first responders” throughout the pandemic, the sheriff said. “It’s been wonderful.”

“We are thankful for Mr. Patel’s generosity and all the support that the community has provided to all first responders during this time,” Carver said.

Elizabeth City Police Chief Eddie Buffaloe said his department “definitely” thanks Patel for his support, as well the community’s support during the pandemic.

“We’re all in this together,” the police chief said.

Patel is the owner of three Elizabeth City Eagle Mart convenience stores, plus a fourth location in Columbia.

“I like to appreciate my heroes,” Patel said, of first responders and why he provided the lunches. “I just wanted to show my appreciation for them.”

Patel, who has been operating convenience stores for 25 years, said he knows many first responders because they frequent his businesses.

On Tuesday, he hosted Wooten, Carver and Buffaloe at the Eagle Mart at Hughes and Halstead boulevards. The three were joined by other members of their departments in picking up boxes filled with giant $10 Big Boss burritos. Latex gloves and face masks to protect against the coronavirus, the virus that causes the respiratory disease COVID-19, were part of the uniform for several in attendance.

Patel said he purchased a little more than 200 burritos. The burritos were cut in half and served with a canned drink. Anyone who’s eaten at Big Boss Burritos, which is located on Poindexter Street downtown, knows the burritos are huge. When fully loaded they include chicken or steak, rice, beans and even French fries and more.

Patel also delivered lunches to the staff at the DaVita Dialysis Center and to workers at Sentara Albemarle Medical Center.

Big Boss Burritos owner Junior Gonzalez-Jimenez said it was great to have the opportunity to provide the meals. He noted that during the pandemic first responders will receive a 30% discount when eating at his restaurant.

You can find out more about which cookies we are using or switch them off in settings.

This website uses cookies so that we can provide you with the best user experience possible. Cookie information is stored in your browser and performs functions such as recognizing you when you return to our website and helping our team to understand which sections of the website you find most interesting and useful.

Strictly Necessary Cookie should be enabled at all times so that we can save your preferences for cookie settings.

If you disable this cookie, we will not be able to save your preferences. This means that every time you visit this website you will need to enable or disable cookies again.

This website uses Google Analytics to collect anonymous information such as the number of visitors to the site, and the most popular pages.

Please enable Strictly Necessary Cookies first so that we can save your preferences!